Doodle dogs may be born innocent, but they quickly learn how to get attention. The way they do it, however, is up to you. You can be proactive and prevent inappropriate behavior, or deal with having to correct unwanted behaviors.  Either way, this is the place to be to help you live harmoniously with your Doodle. 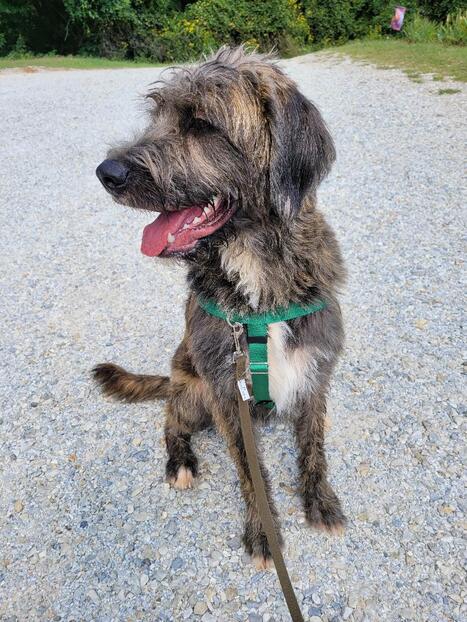 Doodle Dogs have several inappropriate behaviors common to their genetic mixture. They include:      While most puppies will grab inappropriate items (i.e. not their own toys, but household items such as remote controls, glasses, or socks) Doodles will do so not necessarily to chew them, but to grab your attention and enlist you in a chase game. Doodles are highly inventive when it comes to getting their parents away from their phones, televisions and keyboards.
It would be a wrong approach to allow these behaviors to go unresolved just because you believe them to be due to your dog's age. Sure, much of it is, but it needs to be redirected into appropriate behavior or it will become habit, remaining through your dog's adulthood.
Puppies as young as 5 weeks of age are capable of learning new concepts. Guiding her in the right direction from day 1 in your home will prevent these behaviors from becoming nasty habits. The old saying, "Prevention is worth a pound of cure," is highly accurate. It will be far easier to remain diligent and guide your Doodle pup into appropriate behavior patterns than to attempt doing so when they've become habit and your dog knows how to ring your bell. Doodles are highly aware of what works and what doesn't. This makes them great trainers of people. You're being trained and not even aware of it!
Preventing Behavior Problems:
If you obtained your Doodle as a young pup, begin here. If your Doodle is already over 5 months of age, skip this part and read the next section.
If you have a young Doodle pup you must be observant at all times. There's no such thing as a quick trip to the kitchen or bathroom without first placing your pup somewhere safe, such as a crate or exercise pen where she cannot get into trouble. This has to be the criteria in order to prevent behavior from becoming habit. It doesn't take more than 2 seconds for a puppy to grab something dangerous and chew on it. You need to be with her to redirect her chewing and play games. When she goes to investigate the tv remote, or couch pillow, show her one of her toys and be excited about playing with her. Toys are far more interesting when they're moving around and involve group play. It doesn't matter how many toys your puppy has; if they're not interactive they quickly lose interest.
Another rule to set is for you to require your Doodle pup to perform something you want, such as a sit, prior to any attention. If she wants to be stroked, she sits first. If she wants to go outside, she comes to you and sits. When you put on her harness, she sits. Prior to going through a door or gate, she sits. Through repetition, your Doodle pup will learn that she gets what she wants when she sits, not when she jumps up.
Cute as it is to see your Doodle stand at the counter, or greet you with hugs at the door, there will be moments when this behavior is annoying, or downright dangerous. Your dog won't know the difference. All she knows is she is rewarded for it, so she repeats it.
Do you want your Doodle up on the counters while your holiday turkey is cooling off? I doubt it. Do you want your Doodle jumping on elderly visitors? Doubtful, too. What about if your Doodle just came in from outside with muddy feet? Will you be happy with her jumping up on your couch and grabbing the pillows? And, if you are visiting with someone, do you believe they'll be comfortable having a large dog jumping on their shoulders as they sit on the couch? Unlikely.
Keep in mind that your Doodle doesn't understand gray areas, sometimes, maybe or specific situations. They only understand whether they can, or can't.
Should your Doodle pup take an interest in the garbage can, redirect her. Should she enjoy greeting people exuberantly, teach her to sit for their attention. If she likes watching TV with you, take charge of the remote. I'm sure she'll learn to trust your judgement on which shows to watch.

Whether you brought home an older puppy, adult dog or were a bad puppy parent, here we'll dig into how to stop inappropriate behavior so that your Doodle will be a better companion.
Before we begin going into each specific behavior problem, let's discuss how we got here.
There are behaviors that are inadvertently rewarded and those that are self-rewarded. An example of the former is touching your dog when she jumps on you. An example of the latter is your puppy using you as a par-cur springboard. Recognizing the source of the reason your dog is behaving inappropriately is the first step to curing the problem.
An earned reward is something that your puppy has learned to do to get praise and treats. For example si for attention. She learns that the moment she sits you pay attention to her, pet her tummy and give her treats.
To be basic: Dogs repeat rewarded behavior.
The first step to stopping a bad behavior is to stop the reward. Secondly, you will need to consistently redirect your dog from an inappropriate behavior into one that is acceptable. Quickly!

For specific information on how to cure your Doodle of bad habits, purchase my book, Doodle Dogs for Dummies.