There's so many types of Doodles, how will you know which one is right for you?
Regardless of the breed mix there's several things of which you can be certain:
1. You will instantly fall in love with your Doodle the moment you meet her.
2. Doodles are very active. This is not a breed mix you'll want if you are an "inside" person.
3. Doodles can be vocal. If left alone, VERY vocal.
4. Doodles are intelligent. If you aren't consistent and set the rules (and stick by them), your dog will train you.
5. Doodles require lots of socialization with other dogs and exposure to unique sounds and sights. Otherwise, your Doodle will be an introvert and reserved (via her Poodle blood).
6. Doodles are expensive. Not just their initial cost, but also feeding, veterinary care and professional grooming.
7. Doodles don't do well left alone for long hours on a regular basis. They can become destructive, loud and, in some cases, mentally unsound.
8. There are some Doodle dogs that are just plain challenging and (in this author's opinion) should never have been crossed with Poodles. This includes Australian Shepherds, Scotties, Sheepdogs, Great Pyr, , Irish Setter, English Setter, Lhasa Apso, Weimaraner, and some others. There are decent crosses and indecent crosses. Be sure to do lots of research on the non-Poodle part of the Doodle you're looking to purchase. The pups may be super cute but you are unlikely to appreciate their personality. 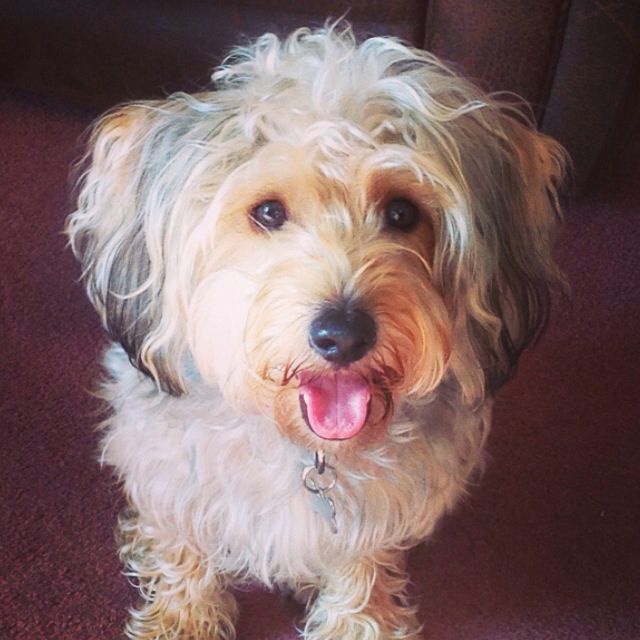 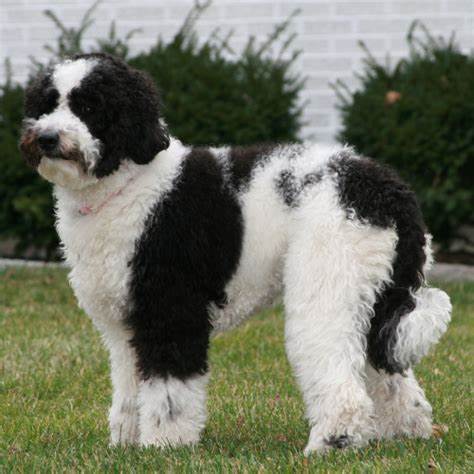 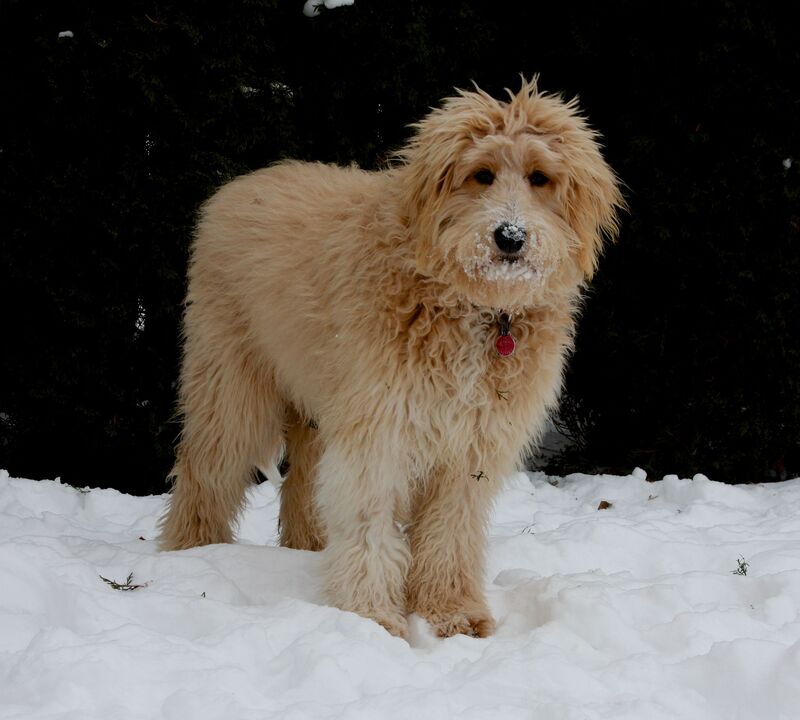 Jackadoodle                                                                       Sheepadoodle                                                            Pyredoodle
Here's the list of the top ten Doodles. They are ranked in order of popularity. I list information about them as a mix and about the 1/2 that is purebred so that you can get a better idea of how your dog will appear as well as behave.
​
Goldendoodle
Goldendoodles are a mix between Golden Retrievers and one of the variety of Poodles.  The Goldendoodle is currently the most popular Doodle dog. It’s easy to understand why. From their long wavy hair to their big intelligent brown eyes and droopy ears, and endless ability to show affection, they’re hard to ignore.
About Golden Retrievers: Golden Retrievers are easy to train, loyal, social and sensitive to the emotions of others. They are sturdy, solid dogs. They adore running, swimming and fetching. You can hardly find a more intuitive dog breed. They are well known as the perfect family dog. They are also a preferred breed for many types of performance exhibitions and as assistance dogs.
You can hardly get a dog with a better personality than a Goldendoodle! That’s one of the main reasons they’re so popular. They’re energetic, playful, love to work and are easy to train. Most are highly social, too. They enjoy the company of other dogs, but equally enjoy the company of their human companions. This breed can best be described as always joyful. Their life span averages between 10 – 14 years, depending on the size variation.
Male Standard Goldendoodles can weigh from 65 – 90 pounds, depending on his genetics. While female Standard Goldendoodles average 60 – 70 pounds.
The size of a Goldendoodle depends on two factors – 1. The size of the Poodle parent, 2. the size of the Golden Retriever parent. A Golden Retriever paired with a Standard Poodle will produce very large offspring; some reaching over 80 pounds. Whereas a Golden Retriever paired with a Miniature Poodle will create Miniature Goldendoodles which can range anywhere from 45 – 60 pounds. Very small Goldendoodles may top out at 35 pounds. Breeders who choose small Golden Retriever parents and pair them with a Miniature Poodle will achieve the smaller Miniature Goldendoodle variants.
A Goldendoodle’s appearance depends greatly on which genes were inherited from the parents. Some can have shaggy, barely wavy coats and others sport tight curls. While purebred Golden Retrievers shed a lot (dust bunnies in every corner!), Goldendoodles shed far less, if at all. It depends on their coat. The looser the shag, the more shedding. Still nowhere near that of a typical Golden Retriever, though.
Goldendoodles can be any shade from a cream color to black, depending on the Poodle parent.  They are long legged, stout, solid dogs. Goldendoodles also tend have large heads; the Miniatures with smaller heads as according to the overall size.
This breed mix tends to have wide-set brown, to amber, eyes. Folded over ears, and thick tail. It’s highly likely that you will also see webbing between his toes as he’s the product of two breeds created for water retrieving. Their barrel (abdomen) tends to be large, with sturdy hips and shoulders. A well bred Goldendoodle will be as long from his chest to tail base as he is tall from the paw pad to top of his shoulder.
While mixing a Golden Retriever with a Poodle does enhance the offspring’s overall vitality by possibly a longer lifespan, there’s still the possibility of genetic abnormalities arising. Goldens are prone to cancer, hip and elbow dysplasia, heart and lung weakness, skin conditions, and Von Willebrand’s disease (a lack of a clotting protein in their blood). Add to this the typical health issues with Poodles and there’s a lot to consider. But, forewarned is forearmed. A professional breeder will test parent dogs for the majority of these conditions before breeding them, reducing the risk in the offspring.
Goldendoodles require a lot of exercise. If you live in an urban area this is not the dog to share your life with, unless you have access to a large, securely fenced area and lots of time to exercise your dog every day. This breed mix tends to be most at home in suburban and rural areas where there’s lots of opportunities to safely exercise. Also take care that you baby proof door-knobs, cupboards and shelves that may have enticing objects on them. This dog can figure out latches, doorknobs and puzzles, such as how to jump from ottoman to chair to front paws up on a shelf.
While they’re great for children of all ages, beware of allowing your dog to be with your children unsupervised. A large, exuberant dog can knock little ones over and be tempted to grab food from low hanging hands. Early training is recommended to offer your dog structure and direction, ensuring a more harmonious household.
Goldendoodles are great for any activity. From obedience and agility to assistance dog jobs, this hybrid should be at the top of the list. In fact, they thrive when put to work as it is stimulating and fulfilling their need to perform.

Labradoodle
The second most popular Doodle Dog is the Labradoodle. This breed mix is what started the entire Doodle Dog fad. An assistance dog breeder in Australia mixed Poodles with his Labrador Retrievers to create dogs to assist those who had allergies to dog fur. It took a while to achieve his goal of the perfect assistance dog, so he had many Labradoodle dogs along the way and had to find them homes. He marketed them as anti-shed Labradoodles that were super cute and shaggy. Their popularity went through the roof!
Originally bred to aid hunters in the field and retrieve from waterways, Labrador Retrievers prefer to be partners with their human companions than to be independent. They are hardy, stout, and strong willed making them great field dogs as well as an assistance dog, search and rescue work and performance. There’s a reason Labrador Retrievers have been the most popular breed for decades. They can do anything.
Despite the popularity of Labradoodles, there are few who can be anything other than a great companion or perform in obedience trials. Luckily, those are the most common reasons to purchase one. They love their families and enjoy the company of other dogs and people. Nobody is a stranger. They do, however, alert when seeing something new and unknown. Their life span averages 10-14 years.
Standard Male Labradoodles (Labrador mixed with Standard Poodle) can be anywhere from 70- 100 pounds. Standard female Labradoodles can be anywhere from 60 – 78 pounds. Miniature Labradoodles (Labrador mixed with a Miniature Poodle) vary between 35-60 pounds.
Your Labradoodle will likely have a shaggy coat that will require regular trimming to remain clean and easily managed. Like their Poodle parent, Labradoodles don’t shed much and shed hair can become caught in the coat and create knots. Coat colors range from tan to black and sometimes parti-colored if the Poodle parent is itself a parti-color. Typically, Labradoodles are black, brown or tan, the same variations seen in Labrador Retrievers.
They have long legs, long neck and thin tails, like their Poodle parent. Their eye color ranges from brown to amber and ears fold over. Labradoodle noses can be anywhere from black to light brown to pink, depending on the coloration of their parents.
You’ll need to understand typical health issues from both the Labrador Retriever and Poodle parents.
Both Labs and Poodles have the possibility of hip or elbow dysplasia. They have large, fast maturing bodies and high energy levels. Without a solid bone structure, joints can suffer. Labradoodles will also be prone to eye disorders, such as progressive retinal atrophy or cataracts. As Poodles can get Addison’s disease, this can also occur in a Labradoodle. Skin disorders are also possible, such as sebaceous adenitis, but easily treatable over the dog’s life. Von Willebrand’s disease is also something that can occur in Labradoodles, as it does appear in both Poodles and Labs.
Both parents of Labradoodles tend to easily get ear infections. This is due to their folded over ears having less air circulation, as well as their love for water. Moisture is trapped within the ear canal, creating the perfect atmosphere for bacteria. Lymphoma is also common, as Labs and in respect, Labradoodles become middle aged. Epilepsy is common in poorly bred Labs and even in some very carefully bred dogs. It will require lifelong monitoring via medications. Inflammatory Bowel Disease has been a common issue with Labs and is now often seen in Labradoodles.
From outright kooky to serious or shy, Labradoodles have a lot of variety in their personalities. Sometimes they’re all three at once. You may be able to attribute this to Labrador Retrievers having some Poodle in their genetics prior to being mixed again with Poodles. In fact, if you were to mix a Labradoodle with a Poodle parent for a ¾ Poodledoodle, you can wind up with some mentally unbalanced offspring.
Labradoodles are very active dogs. They need to run a lot. They need a safely fenced yard or large acreage to satisfy their energy levels. This is not the type of dog to have if you live in the city, or a small home. They thrive within an active lifestyle, with lots of opportunity to exercise. Do not consider this breed mix unless you have a safely fenced yard, or at least access to one. If you must be away from home for long periods of time, contemplate doggie daycare. One walk a day will not be enough to keep them out of trouble.
As a highly active breed mix, Labradoodles are well matched with older children, young adults and other active families. They are easily trained and love to learn. Training your Labradoodle at a young age will prevent many future behavior problems. It’ll also be important to socialize your dog, as many Labradoodles can be quite reserved with new people. Keeping your Labradoodle stimulated with a lot of interactive toys, going out and exploring new places, and meeting new people will be important in creating a well-balanced Labradoodle.

There are more varieties of Doodle dogs to learn about. You can find out more by purchasing Doodle Dogs for Dummies. Click on the icon below.